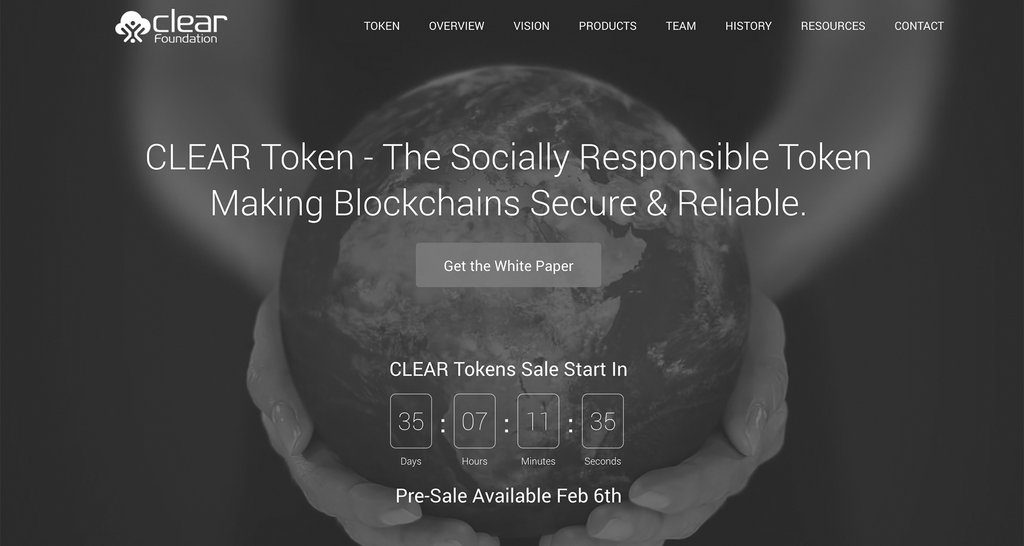 As one of the largest independent open source communities in the world with over 103,000 members, the ClearFoundation will dedicate half of the proceeds from the ITO to fund a “Stability Endowment” that will allow it to continue to build, promote, and defend open source and Blockchain-based technologies around the globe while making Blockchain nodes secure and reliable. The balance of the ITO proceeds will fund a Utility Platform made available through ClearFoundation’s commercialization partner, ClearCenter (and its channel partners), via ClearCenter’s Blockchain-based ClearNODE hardware, software, and services.

Effective today, ClearFoundation has begun the public Pre-Sale portion of its CLEAR Tokens, a process whereby interested parties commit to purchase a certain amount of CLEAR Tokens at a set price. The Pre-Sale is slated to remain open through March 12, 2018, with a Public Sale running from March 13 through July 4, 2018.

“For over 10 years, ClearFoundation has been building a technology ecosystem designed to enable and empower individuals to manage their own self-interests and to fight the irresponsible use and deployment of technology,” said Michael Proper, Chairman of ClearFoundation and Founder & CEO of ClearCenter. “Over the next five years we will raise $1 billion through the sale of CLEAR Tokens, with half of the proceeds dedicated to an endowment that will be used to stabilize these Blockchain-based utility tokens and to bless the lives of people around the world.

“The other half of the proceeds will be used to build a secure and reliable platform for delivering Blockchain-based products, services and applications via the ClearOS Marketplace. When we combine ClearOS (and the other open source apps in the ClearOS Marketplace) with the power made possible through our strategic partnership with Hewlett Packard Enterprise (HPE), the potential is remarkable. This combination creates incredible opportunities for developers to build on a platform with built-in ‘Enterprise-grade Blockchain Security for Everyone.’ We invite everyone to join us and become an active ‘node’ on the CLEAR network. In other words, take control of your technological life to unleash your full potential.”

Additional details about the ITO and the product/service offerings available from ClearCenter and ClearFoundation are available here.

{NOTE:  Due to time zone differences, details about the ITO were formally announced earlier today (February 6, 2018) during the Blockchain Economic Forum 2018 in Singapore. February 6 is known as New Zealand’s National Day, or as it is commonly referred to in New Zealand: “Waitangi Day.”}

As noted earlier in this release, a key component of the CLEAR Token offering is the launch of ClearNODE. A new offering from ClearCenter, ClearNODE protects individuals and businesses with the first secure backbone, platform and app store for Blockchains and digital currencies. ClearNODE combines ProLiant server hardware and Silicon Root of Trust technology from HPE with the ClearOS operating system, and with additional software and services offered via the ClearOS Marketplace. Through its ClearOS Marketplace, ClearCenter is dedicated to bringing ‘Enterprise-grade Blockchain Security for Everyone” to the masses, and there are presently over 100 apps and service offerings available in the ClearOS Marketplace — with new ClearNODE-related apps available soon.

“ClearNODE is a bundle of hardware, software, and services that provides four key functions that no one else offers to help you 1) Harden your system, 2) Consolidate resources, 3) Secure your network, and even 4) Monetize your unused storage,” Proper said. “In addition, ClearNODE also enables a new generation of uses as a managed service, including end-to-end secure audits, private exchanges, hardened and secure digital- and hardware-based wallets, new farming options, and much more.”

ClearFoundation was formed in 2009 in New Zealand as an organization focused on managing and developing the source code and repository of ClearOS, an open source operating system. ClearCenter was also formed in 2009, but is headquartered in Orem, Utah, and is focused on commercializing ClearOS and other open source applications and services, whether developed by the company or by members of the open source community.

ClearCenter is now one of the leading independent providers of open source software and IT management services on the planet. Specifically, ClearCenter software/services now

in June 2017 ClearCenter announced it had entered into an exclusive worldwide partnership with Hewlett Packard Enterprises (HPE) whereby ClearOS would begin to be pre-installed on HPE’s ProLiant servers. Then in November 2017, ClearCenter announced its acquisition of Austria-based Minebox IT Services, one of the leading Blockchain providers of decentralized cloud-based storage solutions.

“We believe that the combination of the ClearFoundation community, the global deployment of the ClearOS operating system and related open source apps and services through the ClearOS Marketplace, tied to the distributed cloud storage capabilities enabled by HPE ProLiant servers everywhere, make a very compelling Blockchain environment,” Proper said.

ClearFoundation is a New Zealand organization which was created in 2009 with the purpose of developing and maintaining ClearOS under a Simple, Secure, and Affordable open source model. The foundation exists to ensure that every small business and distributed IT environment on the globe can have access to enterprise-grade IT security, privacy, filtration, and management tools. Visit http://clearfoundation.co.nz for more information.

ClearCenter creates simple, secure and affordable products for managing Hybrid IT. ClearCenter’s ClearOS is a Linux-based open source operating system for managing Cloud, Server, Network and Gateway layers. It is designed for homes, small-to-medium size businesses and distributed environments. Available in multiple languages and in use in 154 countries around the globe today, ClearOS has more than 430,000 deployments serving more than 10.4 million users. Visit https://www.clearcenter.com for more information.