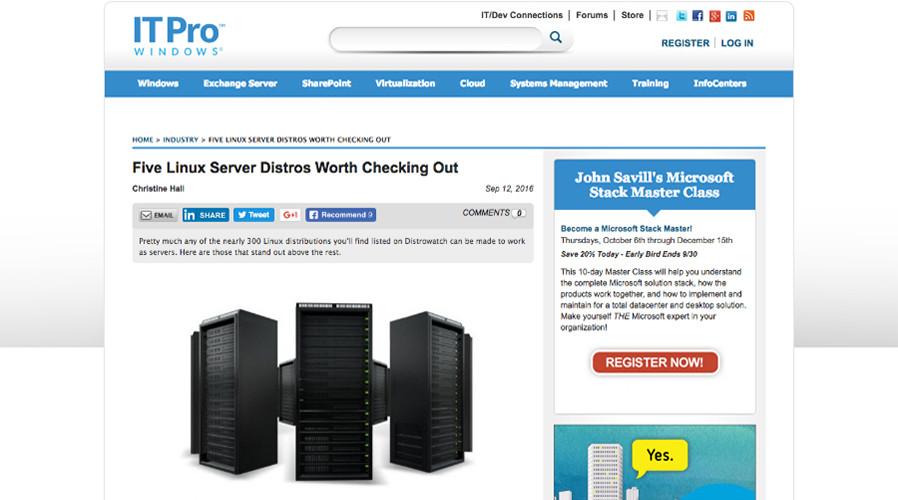 Pretty much any of the nearly 300 Linux distributions you’ll find listed on Distrowatch can be made to work as servers. Since Linux’s earliest days, users have been provisioning “all purpose” distributions such as Slackware, Debian and Gentoo to do heavy lifting as servers for home and business. That may be fine for the hobbyist, but its a lot of unnecessary work for the professional.

From the beginning, however, there have been distributions with no other purpose but to serve files and applications, help workstations share common peripherals, serve-up web pages and all the other things we ask servers to do, whether in the cloud, in a data center or on a shelf in a utility closet.

Here’s a look at four of the most used Linux server distros, as well as one distro that might fit the bill for smaller businesses.

Red Hat Enterprise Linux: Perhaps the best known of Linux server distros, RHEL has a reputation for being a solid distribution ready for the most demanding mission critical tasks — like running the New York Stock Exchange for instance. It’s also backed by Red Hat’s best-of-breed support.

The downside? While Red Hat is known for offering customer service and support that’s second to none, its support subscriptions aren’t cheap. Some might point out, however, that you get what you pay for. Cheaper third party support for RHEL is available, but you might want to do some research before going that route.

CentOS: Anyone who likes RHEL but would like to avoid shoveling money to Red Hat for support should take a look at CentOS, which is basically an RHEL fork. Although it’s been around since 2004, in 2014 it became officially sponsored by Red Hat, which now employs most of the project’s developers. This means that security patches and bug fixes are made available to CentOS soon after they’re pushed to Red Hat.

If you’re going to deploy CentOS, you’ll need people with Linux skills on staff, because as far as technical support goes, you’re mainly on your own. The good news is that the CentOS community offers excellent resources, such as mailing lists, web forums, and chat rooms, so help is available to those who search.

Ubuntu Server: When Canonical announced many years back that it was coming out with a server edition of Ubuntu, you could hear the snickers. Laughter turned into amazement rather quickly, however, as Ubuntu Server rapidly took hold. This was partly due to the DNA it shares as a derivative of Debian, which has long been a favorite base for Linux servers. Ubuntu filled a gap by adding affordable technical support, superior hardware support, developer tools and lots of polish.

How popular is Ubuntu Server? Recent figures show it being the most deployed operating system both on OpenStack and on the Amazon Elastic Compute Cloud, where it outpaces second place Amazon Linux Amazon Machine Image by a mile and leaves third place Windows in the virtual dust. Another study shows it as the most used Linux web server.

SUSE Linux Enterprise Server: This German distro has a large base of users in Europe, and was a top server distro on this side of the Atlantic until PR issues arose after it was bought by Novell in the early part of the century. With those days long behind it, SUSE has been gaining ground in the US, and its use will probably accelerate now that HPE is naming it as its preferred Linux partner.

SUSE Linux Enterprise Server, or SLES, is stable and easy to maintain, which you’d expect for a distro that’s been around for nearly as long as Linux itself. Affordable 24/7 “rapid-response” technical support is available, making it suitable for mission critical deployments.

ClearOS: Based on RHEL, ClearOS is included here because it’s simple enough for anyone, even most non-techies, to configure. Targeted at small to medium sized businesses, it can also be used as an entertainment server by home users. Using a web-based administration interface for ease-of-use, it’s built with the premise in mind that “building your IT infrastructure should be as simple as downloading apps on your smart phone.”

The latest release, version 7.2, includes capabilities that might not be expected from a “lightweight” offering, such as VM support which includes Microsoft Hyper-V, support for the XFS and BTRFS file systems, as well as support for LVM caching and IPv6. Available in a free version or in an inexpensive “professional” version that comes with a variety of support options.