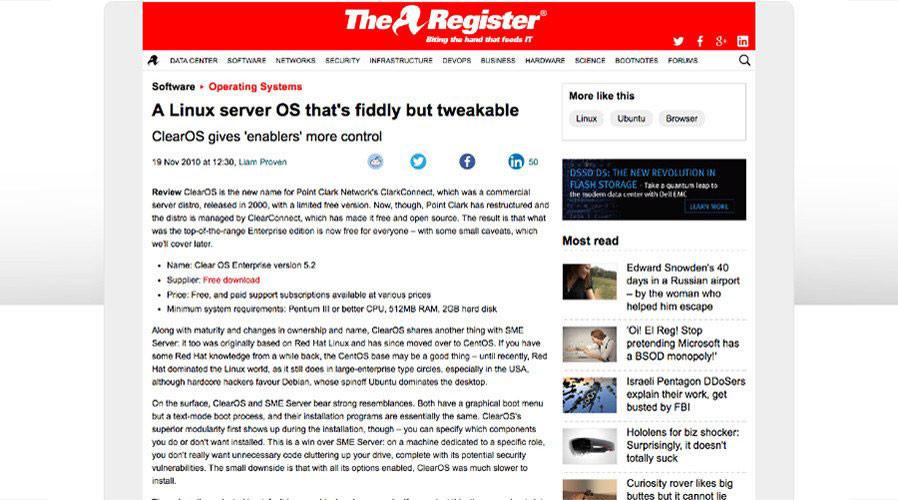 Review ClearOS is the new name for Point Clark Network’s ClarkConnect, which was a commercial server distro, released in 2000, with a limited free version. Now, though, Point Clark has restructured and the distro is managed by ClearConnect, which has made it free and open source. The result is that what was the top-of-the-range Enterprise edition is now free for everyone – with some small caveats, which we’ll cover later.

Along with maturity and changes in ownership and name, ClearOS shares another thing with SME Server: it too was originally based on Red Hat Linux and has since moved over to CentOS. If you have some Red Hat knowledge from a while back, the CentOS base may be a good thing – until recently, Red Hat dominated the Linux world, as it still does in large-enterprise type circles, especially in the USA, although hardcore hackers favour Debian, whose spinoff Ubuntu dominates the desktop.

On the surface, ClearOS and SME Server bear strong resemblances. Both have a graphical boot menu but a text-mode boot process, and their installation programs are essentially the same. ClearOS’s superior modularity first shows up during the installation, though – you can specify which components you do or don’t want installed. This is a win over SME Server: on a machine dedicated to a specific role, you don’t really want unnecessary code cluttering up your drive, complete with its potential security vulnerabilities. The small downside is that with all its options enabled, ClearOS was much slower to install.

The only option selected by default is a graphical system console. If you select this, the server boots into a GUI with no window manager or desktop, just a full-screen Web browser which automatically loads the login page for the web-admin console. This goes against the grain for Unix veterans, but it looks a little friendlier to those more used to Windows servers. Oddly, the web browser is “Gran Paradiso“, a beta version of Firefox 3.0 from 2007. The server can be administered either from its own console or remotely from any workstation using a web browser by entering its IP address or name, which defaults to system.clearos.lan. If you remove the graphical console, it uses a text-mode web browser to permit basic admin to be done on the server itself.

Although it’s a little more elegant-looking than SME Server’s, ClearOS’s web-based admin interface is rather more complex, too – but then, ClearOS is a rather more complex product. A sidebar down the left hand side holds all the main options, which expand and contract automatically as you click through the options: Directory, Network, Gateway, Server, System, Reports and ClearCenter. Curiously, all the same options are duplicated across the top of the dashboard as well, where they become drop-down menus. Some of the headings are less than immediately intuitive – for instance, the vital “Users” section is under Directory, along with groups and “Domain” settings – but the latter doesn’t contain the settings for whether your ClearOS box is a Windows domain controller or not. It will take a little while to become familiar with the interface, unlike SME Server, which is barely more complex than a router.

By default, most services are turned off, so one of the administrator’s first tasks is to go through the list, identifying the various components you need, enabling them and in many cases setting them to start automatically at boot time. This is a pervasive feature of ClearOS – all too often, you create a share or something and then, as a separate step, have to go and mark it as “enabled” before it will work.

Some functions are locked out until you create an account on ClearCenter’s website and then use the dashboard to register your new server under that account. After this, you can view available software updates, apply them and access a few additional free services, including backup and restore of your server’s config, updates for the antimalware and antispam databases and a free dynamic DNS name for remote access to your box.

ClearOS also makes updating easy, but you have to sign up and register your server to get them

The range of services that a ClearOS box can provide is extensive: for instance, file shares can be any combination of a Windows file share, an FTP site, a Web site or a unique email address. The email server has an automatic archiving function for legal records-keeping compliance and an option to insert boilerplate text – such as legal disclaimers – into outgoing mails. There is a comprehensive set of email-scanning options on board as standard. As well as scanning emails and their contents, you can block the transmission of various attachment types, apply anti-spam and greylisting rules and quarantine suspicious messages.

As a firewall, ClearOS includes 1:1 NAT, stateful packet inspection, DMZ support, intrusion detection and more. As a Web server, it includes PHP and MySQL. Various additional features are also available to paid users, such as an inexpensive server-monitoring service.

The dashboard includes basic server monitoring, with live figures for the amount of disk in use, number of processes and services that are running. There’s also a reporting section, which can show live figures and export (or email) text files.

Sadly, ClearOS did not handle dual hard disks as gracefully as SME. It did use both, putting its root partition on one and the swap partition on the other, but this is not an efficient use of the space. If you want RAID on a ClearOS machine, be prepared to configure it manually – either use custom partitioning and set up a Linux software RAID by hand during installation, or fit a supported hardware RAID controller from a short list of Adaptec and Escalade models. The dashboard offers monitoring options for both.

Out of the box, groupware functionality is restricted to using LDAP to share a company-wide address book with all users. Any other workflow or similar tools rely on the mail client in use, such as Outlook in IMAP mode or Mozilla Thunderbird.

It is possible to install the Zarafa Collaboration Platform groupware system on ClearOS, but to do this would require some Linux knowledge. The free version of Zarafa only allows three users, and full Exchange Server type functionality in Outlook requires a proprietary connector.

For basic purposes, ClearOS matches up well to SME Server. It is a little fiddlier to get going – more things must be manually set up, and in places this is a multi-stage operation: first configuring services, then remembering to enable them afterwards. However, it’s all done from within the web-admin GUI – not a single command line or config file is in sight at any time.

It doesn’t have SME Server’s automatic software RAID, nor does it act as an Apple File Protocol server for Mac clients, but aside from them, it exceeds SME Server’s capabilities in almost every way, and offers considerably more fine-grained control over its functions. It’s also modular, so you install only the functions you want your server to provide. This not only makes for a more streamlined installed operating system but simplifies the dashboard and thus administration as well.

Overall, ClearOS Enterprise version 5.2 lives up to its name. Whereas SME Server is fairly clearly aimed at small, one-office organisations, ClearOS sets its sights rather higher. It’s modular, sports finer-grained admin tools and has optional paid support. Unless you really want to be able to tweak your server quite this much, it might be rather overkill for smaller systems, but for a professional Windows server admin coming over to the Linux side of things for the first time, this would be a great introduction.

Coming some time in early 2011 should be ClearOS 6, which will integrate the Zarafa groupware server for single-click collaboration. No public betas have been announced, but this could be a significant step forwards.